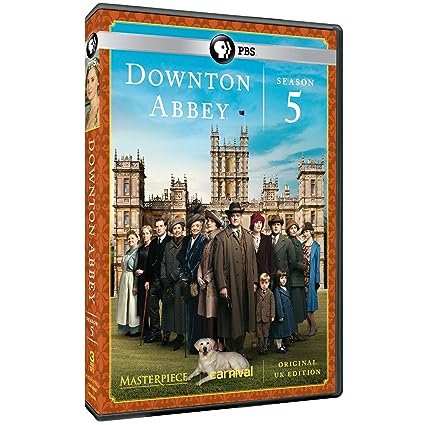 Downton Abbey just may be my all-time favorite show.

I am well aware that it is just a show, but I’ve spent so many Mondays eating lunch with Lady Mary, Lady Edith, Lady Cora, Anna and the many other wonderful characters that I feel as though I’ve lost a large group of friends now that the show has ended.  I’ve also really enjoyed discussing the show with my actual friends over the past six years.

Knowing there are others who will be missing Downton Abbey as much as I am, I’m sharing a list of books and videos that I hope will help my fellow Downtonites with the transition to life-after-Downton.

Please comment below with your favorite books and videos for Downton Abbey fans!

Lady Almina and the Real Downton Abbey: The Lost Legacy of Highclere Castle by The Countess of Carnarvon

To Marry an English Lord: Tales of Wealth and Marriage, Sex and Snobbery by Gail MacColl

Maisie is from a lower class family, but after she starts working as a maid in a wealthy home in London her intelligence is discovered by the lady of the house.  She then gains a tutor, becomes a nurse in World War I, and ultimately trains to become a private investigator.  There are currently twelve books in the Maisie Dobbs series.

The House at Tyneford by Natasha Solomons

A young Jewish girl from a wealthy Vienna family takes a position as a maid in an English country house to escape Jewish persecution during World War II.  The story follows her struggles to adapt to a very different position from how she grew up and her relationship with the father and son of the house.
Haunting of Maddy Clare by Simone St. James
Sarah is employed by ghost hunters to help investigate a barn believed to be haunted by a maid named Maddy Clare.  This story takes place between between the World Wars.  Not the strongest book on this list, but it’s from the same time period as Downton Abbey, I like ghost stories, and I found it enjoyable.

Pride and Predjudice
My favorite version of one of Jane Austen’s best books features Colin Firth in the role of Darcy.  Highly recommended!
Anne of Green Gables and Anne of Avonlea
I love these movies based on the classic novels by L.M. Montgomery about an orphan adopted in Prince Edward Island.  Highly Recommended!
Horatio Hornblower
A great mini series based on the Hornblower book series by C.S. Forester and starring Ioan Gruffud.  I enjoyed the videos so much that I read the entire book series afterwards.
Mr. Selfridge
A later time period than Downton Abbey, Mr. Selfridge tells the story of Harry Selfridge who started the first department store in London.
Call the Midwife
Young ladies work as midwives in a poor area of East London in the 1950’s.  Great characters and stories.

The following shows are not similar to Downton Abbey in time period or setting but they are some more of my favorite shows.  Maybe they will appeal to other fans of Downton Abbey as well!
Alias
Starring Jennifer Gardner as a young field agent who finds out that she’s not working for the CIA.  One of my top favorite shows!
The Good Wife
Another of my favorite shows that is ending after this season!  Great characters and story about Alicia who does not divorce her husband after his political scandal but also manages to reinvent herself as a successful attorney.
Canterbury’s Law
If you like The Good Wife, you may like Canterbury’s Law starring Julianna Margulies (from The Good Wife) as attorney Elizabeth Canterbury.  The dvd linked above appears to have all six episodes, including the pilot episode.
Commander in Chief Part I and Part II
A series about another strong female character, Geena Davis stars as U.S. President Mackenzie Allen.